[China Daily] HKJA needs to prove, not claim, its innocence 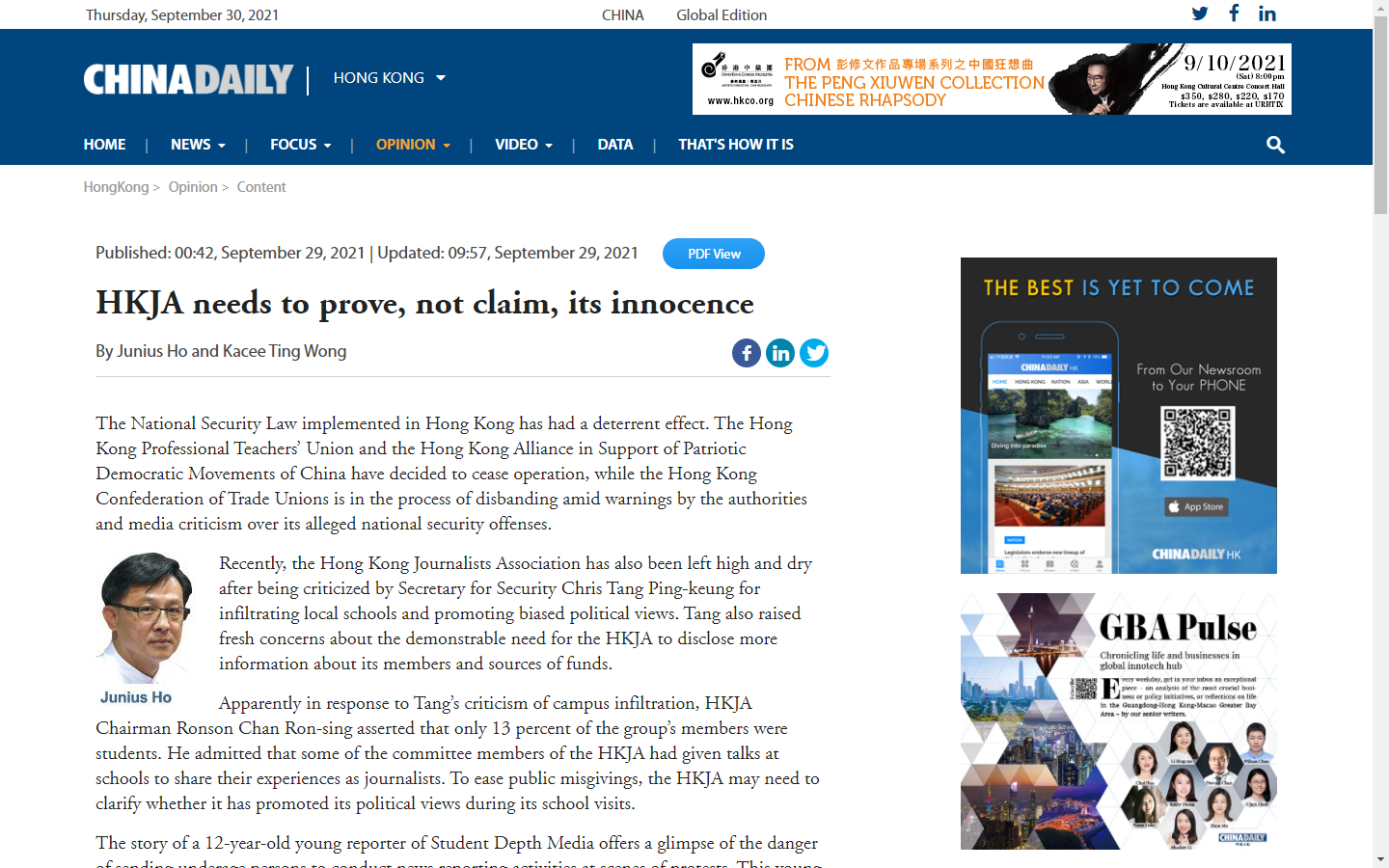 HKJA needs to prove, not claim, its innocence

The National Security Law implemented in Hong Kong has had a deterrent effect. The Hong Kong Professional Teachers’ Union and the Hong Kong Alliance in Support of Patriotic Democratic Movements of China have decided to cease operation, while the Hong Kong Confederation of Trade Unions is in the process of disbanding amid warnings by the authorities and media criticism over its alleged national security offenses.

Recently, the Hong Kong Journalists Association has also been left high and dry after being criticized by Secretary for Security Chris Tang Ping-keung for infiltrating local schools and promoting biased political views. Tang also raised fresh concerns about the demonstrable need for the HKJA to disclose more information about its members and sources of funds.

Apparently in response to Tang’s criticism of campus infiltration, HKJA Chairman Ronson Chan Ron-sing asserted that only 13 percent of the group’s members were students. He admitted that some of the committee members of the HKJA had given talks at schools to share their experiences as journalists. To ease public misgivings, the HKJA may need to clarify whether it has promoted its political views during its school visits.

The story of a 12-year-old young reporter of Student Depth Media offers a glimpse of the danger of sending underage persons to conduct news reporting activities at scenes of protests. This young reporter was escorted away by police after he had covered protests at the Harbour City mall in Tsim Sha Tsui. Judging from this event, the principle propagated by the HKJA that “everyone is a journalist” is absolutely wrong. Hong Kong Chief Executive Carrie Lam Cheng Yuet-ngor said students should be protected from being poisoned by false and biased information on campuses.

There is no lack of evidence supporting the allegation that the HKJA has biased political views. It is not stretching the truth to argue that the HKJA’s public responses to the 2019 “black revolution” are contrary to the old journalists’ adage of “assume nothing, believe nobody and check everything.” Before checking everything, the HKJA wrote a letter to relevant United Nations organizations accusing Hong Kong police of using unreasonable force to quell riots and hinder journalists from discharging their duties.

Under normal circumstances, the police tend to set up designated press areas to confine movements of journalists during their coverage of protests and demonstrations. Although this practice is a restriction, it is also a necessary device to safeguard press freedom and protect journalists under chaotic circumstances. During the 2019 “black revolution”, however, the Hong Kong Police Force was tested to the limit by widespread violence in street riots so that it simply could not provide personal protection for every reporter covering the illegal acts of the rowdy crowds. The chaotic situations prevented the police from setting up well-regulated press areas to safeguard reporting. Let’s not forget the fact that very often, individuals wearing “press” uniform vests put themselves between police officers and black-clad rioters as human shields for the latter, yet the HKJA accused the police of obstructing press freedom.

On some occasions, reporters mixed with protesters, making it difficult for the police to identify true reporters. To make matters worse, the press cards of reporters were not accredited by authorities. According to Chief Superintendent Kenneth Kwok Ka-chuen of the Public Relations Branch of the police, some fake reporters allegedly obstructed police work, and some even assaulted police officers. Without concrete evidence to prove obstruction of press freedom by the police, the HKJA was making law enforcement more difficult than it already was by making unfair allegations against the police force and causing headaches for the Complaints Against Police Office.

In July, the HKJA published its 2021 annual report on the effects of an alleged repressive government on the media in Hong Kong. It highlights the arrest of Jimmy Lai Chee-ying on national security offenses, the closure of Apple Daily, the plan to criminalize fake news, and the “attack” on Radio Television Hong Kong. Chan’s predecessor, Chris Yeung Kin-hing, also claimed that press freedom had been “destroyed by totalitarianism”.

Apparent bias can easily be found in the above annual report. The HKJA criticized the arrest of Lai, the raid on Apple Daily and the freezing of its assets. It called these moves unprecedented and a psychological blow to the media. But it has failed to evaluate the gravity of the allegations faced by Lai and his cohort. Nor should it resort to “trial by media” before the court began hearing Lai’s cases. In Attorney General v Cheung Kim-hung (1997), the court observed: “One of the most common forms (of wrongful interference) is the making of comments about current cases.”

The HKJA also recommended that the Standing Committee of the National People’s Congress review the implementation of the National Security Law for Hong Kong by taking into account the change of circumstances and the anxieties it triggered among some people. Instead of demanding legal reform and amendments, the HKJA should return from the cliff edge and refocus on upholding professionalism. Deviating from professionalism out of political bias is wrong, unjustifiable and dangerous. It should not turn itself into an anti-government political organization.

The high-profile propagation of biased political views locally and internationally to discredit the Hong Kong Special Administrative Region government and the previous close relationships between Apple Daily and the HKJA support the legitimate demand made by Tang that the HKJA should disclose more information about its members and sources of funds. The current executive committee includes journalists from outlets such as Ming Pao, the South China Morning Post, the Hong Kong Free Press, Stand News, RTHK and Now TV. The unwillingness of the HKJA to disclose its membership list and the exclusion of pro-establishment outlets in its executive committee have raised a reasonable inference that the subversive legacies of Apple Daily and Mak Yin-ting may remain lurking in the shadows.

Chan also claimed that the HKJA had never received any overseas funding. Its annual account statements are furnished annually to the Registry of Trade Unions. But such a disclosure is inadequate. Instead of framing Tang’s demand as a threat, the HKJA should show due respect for the National Security Law implemented in Hong Kong. Everyone in Hong Kong has a sacred duty to safeguard national security. The HKJA needs to satisfy Tang’s request if it wishes the public to believe it has nothing to hide. The HKJA should not operate behind a curtain of secrecy.

Junius Ho is a Legislative Council member and a solicitor.