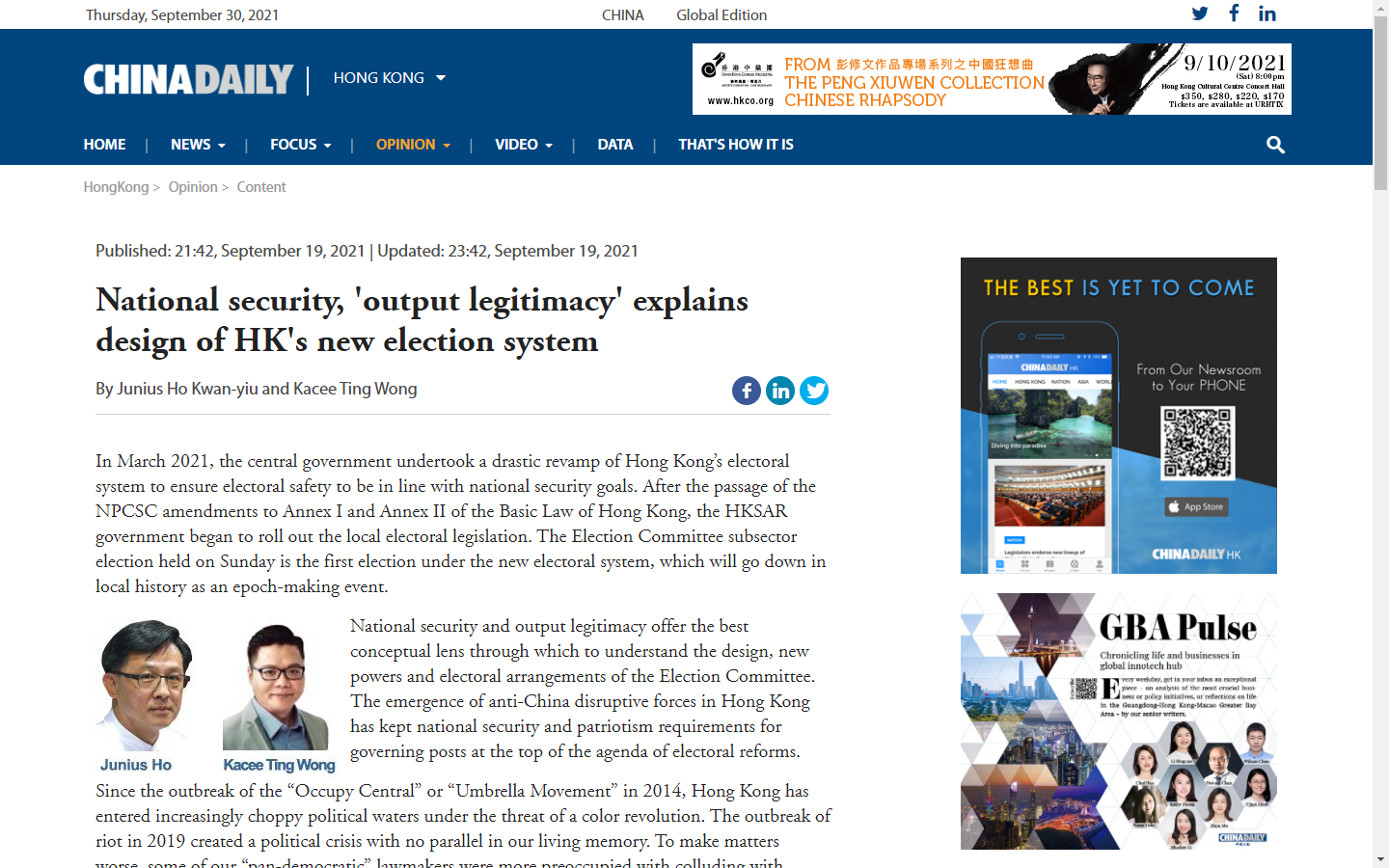 In March 2021, the central government undertook a drastic revamp of Hong Kong’s electoral system to ensure electoral safety to be in line with national security goals. After the passage of the NPCSC amendments to Annex I and Annex II of the Basic Law of Hong Kong, the HKSAR government began to roll out the local electoral legislation. The Election Committee subsector election held on Sunday is the first election under the new electoral system, which will go down in local history as an epoch-making event.

National security and output legitimacy offer the best conceptual lens through which to understand the design, new powers and electoral arrangements of the Election Committee. The emergence of anti-China disruptive forces in Hong Kong has kept national security and patriotism requirements for governing posts at the top of the agenda of electoral reforms.

Since the outbreak of the “Occupy Central” or “Umbrella Movement” in 2014, Hong Kong has entered increasingly choppy political waters under the threat of a color revolution. The outbreak of riot in 2019 created a political crisis with no parallel in our living memory. To make matters worse, some of our “pan-democratic” lawmakers were more preoccupied with colluding with external forces to carry out “regime change” than with solving livelihood issues in the city. Although the promulgation of the National Security Law has succeeded in restoring political stability in Hong Kong, it still needs to put national security first in reconstituting the Election Committee.

Instead of focusing on competition, output legitimacy emphasizes effectiveness of policy outcomes for the people. In line with the theory of output legitimacy, advocates for good governance should, under special national-security circumstances, look beyond the superficial indispensability of competitive election and focus on the introduction of effective measures to ensure that the reconstituted Election Committee will meet the demands of the people. While Western critics hate the reduction in competition, the electoral reforms are heading for the right direction by ensuring that the members of the Election Committee are competent to maintain good governance, improve executive accountability and command the trust and respect of Hong Kongers.

While Western critics hate the reduction in competition, the electoral reforms are heading for the right direction by ensuring that the members of the Election Committee are competent to maintain good governance, improve executive accountability and command the trust and respect of Hong Kongers

Firstly, the new electoral system is designed to pick genuine patriots to ensure national security. Recently, Xia Baolong, director of the State Council’s Hong Kong and Macao Affairs Office, stressed that patriots must be able to do things and achieve results. Because of the reconstitution of the Legislative Council, the Election Committee will elect 40 members of the 90-seat Legislative Council from their own ranks. If incompetent patriots of the Election Committee are allowed to become lawmakers, they will not only fail to meet the needs of Hong Kongers, but hurt the credibility of the central government.

The new composition of the Election Committee gives us the impression that the balance of power will be tilted against the property tycoons. Recently, property tycoons were told that only two members of any one family can participate in the reconstituted Election Committee. The electoral reform will bring about broader representation of society on the Election Committee, boosting hope that a significant tailwind will be formed for the introduction of drastic and effective measures to address livelihood issues in Hong Kong. Priority should be given to the housing problems in the territory.

A research conducted by the International Food Policy Research Institute shows that a superheated election campaign with numerous candidates may impede democracy. In many developing countries, governments actually become less competitive when political competition is cut-throat. Even in the US, competitive election often results in partisan polarization and vetocracy. The pandemic has, in many ways, discredited Western-styled democratic system. More and more people are no longer sure whether the Western-styled democratic system is the best socio-political model to achieve good governance. There is no greater nonsense than the suggestion that competitive election can guarantee good governance.

At least two candidates coming from backgrounds outside the pro-establishment camps -- social workers Tik Chi-yuen and Francis Chow Yin-ming -- managed to pass a vetting process that evaluates hopefuls’ loyalty to Hong Kong and the Basic Law. We hope competition for seats in the Election Committee will increase once those who aspire to participate become more familiar with the new electoral rules. A reference to Article 68 of the Basic Law reminds us that the ultimate aim is the election of all the members of the Legislative Council by universal suffrage. Contrary to the criticism made by lawmaker Pierre Chan of the medical constituency, the new electoral system is not a regression in democracy from a long-term perspective.

Junius Ho Kwan-yiu is a Legislative Council member and a solicitor.